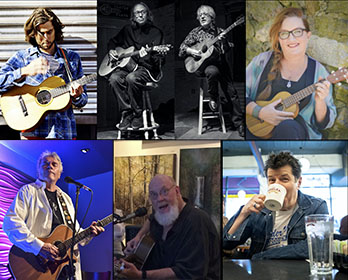 Presented by The Santa Fe Performance Exchange, in collaboration with Southwest Roots Music, this free online event is the brainchild of hosts Tom Mauter and Kris Swedin, who have long been presenters of house concerts and great supporters of live music. It was their idea to bring together this particular eclectic group of talented singer-songwriters, all of whom have performed at their “in person” NM events in the past. The event is free to the public, and will stream from the following locations:
https://www.youtube.com/c/SouthwestRootsMusic
https://www.facebook.com/Santa-Fe-Performance-Exchange-193271667351175

Catfish Hodge
Catfish has been called an “American folk blues hero” and has been a mainstay on the American Blues music scene for many decades. His collaborators include Little Feat and Bonnie Raitt, among many others.
“Catfish on stage is like a twelve gauge shotgun of emotion going off!” – Rolling Stone Magazine
http://www.catfishhodge.com/

Jaime Michaels
“Jaime Michaels creates songs that follow the lives of ancestors and neighbors in tales told with the graceful edge of a master storyteller.” – Danny McCloskey / the Alternate Root
“Jaime Michaels’ songs are as elusive as smoke and mirrors…His voice raspy with sadness and longing, Michaels pens contemporary tunes where love shines from within like a falling star…” – Sing Out!
https://www.jaimemichaels.com/

David Berkeley
“Berkeley sings in a lustrous melancholy voice with shades of Tim Buckley and Nick Drake… As his melodies ascend to become benedictions and consolations, the music shimmers and peals.” – The New York Times
“Berkeley’s songs are supremely melodic, in ways only the most skilled singer/songwriters are able to convey.” – No Depression Magazine
http://davidberkeley.com/

Vince Bell
Vince Bell’s songs have been performed and recorded by such diverse talents as Little Feat, Lyle Lovett and Nanci Griffith, and both a ballet and musical have been set to his work.
“As a songwriter he can easily take his place in that hallowed area occupied by the likes of Randy Newman, Bruce Cockburn and Tom Waits.” – Musician Magazine.
https://vincebell.com/

Jono Manson
“Listening to Jono Manson’s 10th solo album—with its abundance of instant-grabber hooks and smartly constructed riffs, shiny melodies and warm harmonies, confident, seductive vocal performances and intelligent, relatable story lines—you have to wonder one thing. Why isn’t this guy famous? Manson has been at it for more than five decades, a denizen of the New York City club scene and beyond.”
– Jeff Tamarkin/Relix Magazine
“The gravelly-voiced Manson attacks the high art of low-rent songcraft with a paid assassin’s precision.” – No Depression Magazine
http://www.jonomanson.com/

Lisa McCormick
Lisa’s passion for music began when most people are still learning their ABCs. “I was addicted to The Beatles by the age of six,” she says. Since then she has enjoyed a varied career including numerous collaborations and has become a mentor to many aspiring musicians and songwriters.
https://lisamccormick.com/