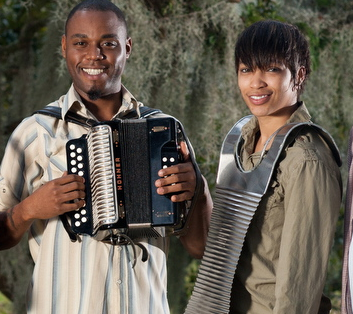 “To propel our Louisiana culture into the future seems to be quite a task, but if one lives for the music as Cedric does, the path seems effortless. These songs may well be early brushstrokes of a life’s worth of possibilities, not only for himself, but also for the identity survival of a culture.” — BeauSoleil’s Michael Doucet

One of the brightest talents to emerge in Cajun, creole and zydeco (Louisiana French) music over the last decade, Cedric Watson is a four-time Grammy-nominated fiddler, singer, accordionist & songwriter who has  immersed himself deeply in French music and language. Over the next several years, Cedric performed French music in 17 countries and on 7 full-length albums with various groups, including the Pine Leaf Boys, Corey Ledet, and with his own group Bijou Creole.

Bijou Creole resurrects the ancient sounds of the French and Spanish contra dance and bourré alongside the spiritual rhythms of the Congo tribes of West Africa, who were sold as slaves in the Carribean and Louisiana by the French and Spanish. With a vast repertoire of songs at his fingertips, Cedric plays everything from forgotten creole melodies and obscure Dennis McGee reels to more modern Cajun and zydeco tunes, occasionally throwing in a bluegrass fiddle tune or an old string band number. Unlike many of his contemporaries, he writes nearly all of his songs on his double row Hohner accordion. Cedric’s songs channel his diverse ancestry (African, French, Native American and Spanish) to create his own brand of sounds.

Cedric’s albums are a tapestry of pulsing rhythms and Creole poetry, and his live performances are unforgettable, all at once progressive and nostalgic.